Reporting from the Tiwi Islands, Australia.

Below are examples of my online – multimedia reporting for the NT News, a News Limited publication in Australia.

DARWIN Sappers Kegan Byng and Josh Daddo have arguably the most dangerous job in the world.

They’re about to move to Afghanistan, where they’ll spend their days locating homemade bombs, or improvised explosive devices. For both men, the war-torn country will be their first overseas deployment.

Sapper Byng, 19, admits to being a little afraid of the hazardous job ahead.

“Yeah, a little bit, bit nervous but a bit excited at the same time. It should be good,” said Sapper Byng, who was inspired to join the army after his father fought in Vietnam.

Part one of a three story series: (Click here to read the original article and view the multimedia video)

Man in red given rockstar welcome

The jolly old man was greeted like a rockstar.

Four hundred wide-eyed children pressed up against a security fence at Elcho Island Airport, waiting for the big guy to step off a plane.

Travelling on Airnorth after giving his reindeer the day off, Santa’s “Ho, ho, ho” could barely be heard over the screams and cheers. “I love coming out to the communities,” Santa said.

“I can’t get over the joy and the smiles on the kids’ faces.”

It was with this song running around in my head, that I made my own‘Cheap Charlie’ dash from Vung Tau to the site of the Australian war time base at Nui Dat and the memorial cross at Long Tan.

I visited Gallipoli in 1997 and being in Ho Chi Minh City earlier this month, I felt the same attraction to see Long Tan – the site of our bloodiest battle during the Vietnam War.

It was a ‘Cheap Charlie’ trip because I didn’t want to take the official $48US Long Tan tour.

BRAVE smiles hid the emotion on the faces of the almost hundred Darwin troops who left for Afghanistan last night. 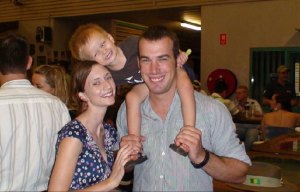 LT Chris Appleton, Ann Sharrock and two and a half year old Liam. Chris was one of the almost 100 Darwin soldiers who departed for Afghanistan. Picture: JUSTIN O'BRIEN

There was a mix of newbies – soldiers who were heading off on their first deployment – and old hands like Corporal Beau Byers.

Only 25-years-old, this will be Cpl Byers fourth overseas deployment. “I just got lucky I got in at the right time,” Cpl Byers said while holding the hand of his fiance Rebecca Holzberger.

“But it’s not so much about luck, the more deployments you get, the more time you’re away from home”.

A bathroom closet where 2 L plastic bottles of the home brew beer were stored inside the one bedroom Moulden unit.

Neighbour Richard Hantelmann, 78, claimed most of the man’s customers were long-grassers.

“People came here in droves to get bottles off him,” he said.

“They’d pull up in their car, get out, take a piss, vomit in the driveway, buy some beer then leave.”

Mr Hantelmann blew the cork on the illegal brewery last week when a group of neighbours purchased a bottle of beer and showed it to a Liquor Commission official.

Why the long face?

BAR staff at the Humpty Doo Hotel got a surprise on New Year’s Eve when a patron rode a horse into the pub and ordered a beer.

The 48-year-old jockey said it was easier to ride to the bar than walk.

“I think people were a bit stunned,” he said. “But it was just another night at the Humpty Doo pub I guess.”

Newsbreaker Dave Grant snapped a photo of Mr Yeend and Elvis waiting to get served. Mr Grant watched as Trevor used a chair to climb atop the four-year-old stallion on the pub’s outside veranda and negotiate his way through an archway into the pub.

Barmaids turned off the ceiling fans when they saw Trevor and Elvis coming, Mr Grant said.

No plans to quit over police raid, says Mayor

DARWIN’S Lord Mayor Graeme Sawyer hopes no-one ever has to go through the situation confronting his family.

In his first extensive interview since police raided his house this week, Mr Sawyer said he planned to continue in his mayoral role.

He said the targeted police search of his Wagaman house was frightening.

“At this stage I’m taking some days off to sort out some issues with my family,” he said standing outside his home yesterday.

During the raid police allegedly uncovered an imitation Luger World War II pistol and a silencer locked in a gun safe. Mr Sawyer has been summonsed to appear in court over the alleged weapons offences.

The youth was picked up by police in the area a short time after the fire was started.

Acting Assistant Commissioner Colleen Gwynne said the juvenile was questioned until 10pm last night and then released into the care of a parent believed to be his mother.

“He has been released from custody at this stage while we conduct further inquiries into what happened. He’s a person of interest, I definitely wouldn’t call him a suspect at this stage,” Ms Gwynne said.

Police believe there was a gang of up to 15 youths roaming the street of Leanyer at the time of the fatal house fire. 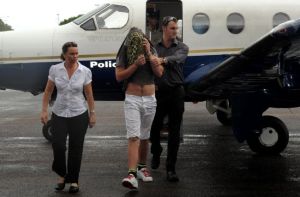 Wayne William Roberts-Barlow is escorted by police at Darwin airport to a waiting vehicle. He was flown to Darwin from Nhulunbuy after being charged with murder. Photo: Justin Sanson

A TIGHT-KNIT Territory town is in shock after a 21-year-old man was charged with the gruesome murder of a woman.

The 38-year-old mother of two was found dead with her throat slashed, lying on a dirt track in Nhulunbuy last week.

Alleged murderer Wayne William Roberts-Barlow (right) was yesterday flown by a police aircraft from Nhulunbuy to Darwin, handcuffed and under heavy guard.

Major Crime detectives permitted television cameras and the NT News to film Mr Roberts-Barlow who pulled a T-shirt above his head as he exited the plane and walked to a sedan.