(Above is a story I filmed secretly ‘one-man-band’ whist in Rangoon, Burma during 2010.)

IN 2010 I travelled to Burma on holiday, to see for myself a country that had intrigued me for many years. 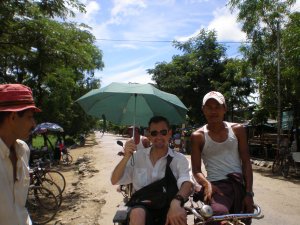 Growing up in Australia, viewers were lucky to see several minutes a month on the Government funded ABC (Australian Broadcast Corporation) nightly news devoted to coverage of Burma and the antics of its military rulers. The commercial networks, never touched it.

I decided to become a journalist after reading a biography about an adventurous Australian journalist named Neil Davis. Davis was renowned for his coverage of the Vietnam War and filming the North Vietnamese tanks as they rolled through the gates at Saigon’s then Presidential Palace.

For me, the trip to Burma was in small part an attempt to follow in Davis’ footsteps. It was an Asian country, ruled by a military dictatorship and shut-off from the world. When Cyclone Nargis hit Burma in 2008, flooding the Ayeyarwady Delta, killing thousands of people  and left two million people without shelter – the military Government prevented foreign aid agencies from entering the country. After seeing ‘Monk’ protesters brutally attacked in 2007 and now Cyclone Nargis, I knew I had to go and see Burma for myself.

I entered Myanmar via AirAsia on a direct one hour flight from Bangkok. With my occupation, ‘carpenter’ written

in my arrival card, my passport was stamped and I walked out into a muggy Friday afternoon with $500 US cash in my pocket. Although it was 2010, there were no ATM’s or credit card facilities in the country – so budgeting was key.

As I say in the video piece above – it was like stepping back into the 1980’s. There had been no foreign western investment in the country for almost three decades and it showed. No Coca-Cola or McDonald’s – it was a rare sight.

I like a can of Coke just like the other guy, but it was refreshing to see the virgin landscape free of western commercialism. The downside is locals pay for it. No foreign investment meant the average Burmese had no chance of improving their standard of living. I met many

friendly Yangon residents who shared a ‘Burmese Tea’ with me and never once complained about their predicament.

Two months after my trip, an election was held and it was won by former military leaders who had simply removed they uniforms to become instant honorable civilians. A week or so later, opposition leader Aung San Suu Kyi was released from house arrest and as I write, Ms Suu Kyi in preparing to host a meeting with United States Sectary Of State Hillary Clinton.

In preparing for my trip to Burma I purchased a Lonely Planet edition about Myanmar (Burma). I was taken aback while reading a section called ‘TO GO OR NOT TO GO’ which suggested ‘you’ should ‘rethink’ your planned trip to Burma. The main argument was that it was highly likely 20% of your spending would go into the pockets of the military junta. What about the 80% which would go directly to locals? I’ve since folded that page in half.

Years ago there was a travel commercial on local television promoting the Northern Territory of Australia as a holiday destination. The catch phrase was – “If you never never go, you’ll never never know.” That’s my advice about Burma – take a chance or you’ll never know.

Go have a look for yourself.