Turning 40 is a mile stone birthday we’re told to celebrate and celebrate big.

For my 40th, I decided to spend a week with my best mates in Los Angeles and Santa Monica, my old ‘home’. A week of eating, drinking – did I mention drinking? And riding.

My birthday present to myself was an accent of Latigo Canyon. A 9.2-mile mountain climb I’d ridden many times over the years with my buddies Johnny Smelzer, Michael Kelley and David Lee.

We are all united through a passion or self-torture for road cycling. Hours spent on two wheels, sitting on a pole,peddling, duelling with cars, legs shaved and 40 mile per hour descents protected by an armour of Lycra! 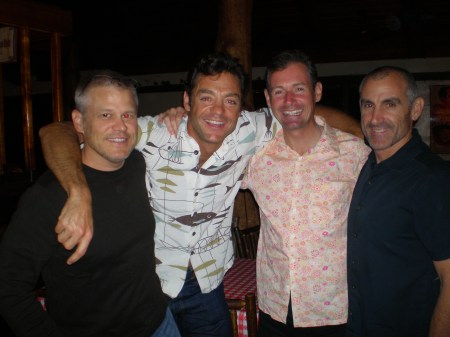 There is something ‘mentally satisfying’ even ‘mystical’ about climbing Latigo Canyon. So on the day of my birthday Johnny and I rolled out with a group of cyclists and set off up the Pacific Coast Highway (PCH) towards Malibu and 40 minutes to the Latigo turn off.

Michael is the ‘fastest’ out of the four of us – followed closely by David Lee. “It is a great climb, it’s like a Tour de France climb .. Minus the French crowds lining the road, spitting on you!”, says Michael cracking a smile.

I’ll never compete in the Tour de France, but climbing Latigo makes you dream you could. It’s steep, alternating from 4.7% and 12% to the summit.

David Lee, who I first met in a spinning studio is a successful working actor and the funniest of our bunch. “It’s a bit of a ball breaker if I must be honest .. It brings out the honest man in you”, David says describing Latigo.

“The first summit is a bit of an illusion because you get up there .. you think you’re there, then you pop around the corner and then there is suddenly another five miles to go and it’s kind of a little disheartening because it kicks up a little bit”, says David.

Most cyclists take between 35 minutes to an hour to climb to Latigo’s second summit. Johnny and I are part of that latter group!

After 30 minutes zig zaging our way up Latigo’s bends, Johnny and I climb through the California coastal ‘June Gloom’ and into sunshine. We pass the time chatting, putting-shit-on each other.

I quickly reply, “I got one gear left.”

15 minutes later we’re at Latigo’s second summit sharing a chocolate bar and jam sandwich before the 12 minute descent back to the PCH, then dinner and margarita’s.

It was the great birthday and I wouldn’t have spent it doing anything else!

This entry was posted on Sunday, August 21st, 2011 at 10:58 AM and is filed under Uncategorized. You can follow any responses to this entry through the RSS 2.0 feed. You can leave a response, or trackback from your own site.