Northern Territory Police Commissioner John McRoberts has moved to put his personal stamp on the organisation he took control of in December last year. Five months in and an 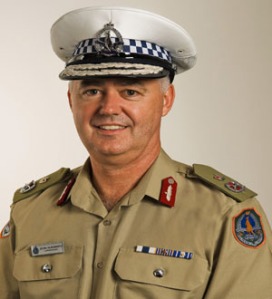 ’85 to 90 percent of people got what they wanted’ – said a source within the Senior ranks.

Commissioner McRoberts is an advocate of career development and the idea behind the shake-up is to give Superintendent’s the chance to nominate and prove themselves in jobs, they want to do.

‘You have to give the Commissioner his due’, a Superintendent said on condition of anonymity. ‘When McRoberts arrived he invited us in for a chat individually and said – What do you want to do? Tell me where you want to go.’

The style of McRoberts is in sharp contract to the former Police Commissioner Paul White. During the eight years Paul White was in-charge according to a source – ‘people were just tapped on the shoulder and told you’re going!’

‘Anything to do with White is out’ said another source. Some changes are obvious, the NT Police business cards have been changed to a more modern look, frontline Officers are now required to wear reflective vests at all times, Officers can now choose either to wear the ‘bush hat’ or traditional Police hat and six monthly ‘Operational Performance Reviews’ have been abandoned.

A winner in the restructuring is Superintendent Jamie Chalker. Currently the Officer in Charge of Darwin Police Station. Chalker is moving to become Commissioner McRoberts Chief of Staff.

Superintendent Chalker is regarded as future Police Commissioner material. Chalker’s father, Robyn Chalker was at one stage the Commander of the NT Major Crime Unit. But, importantly like it or not – Jamie Chalker has the confidence of the lower ranks.

‘.. he’s switched on .. you’re not going to be able to pull the wool over his eyes .. he’ll be able to deal with a lot of the shit’ according to an Officer at the Darwin Station.

Chalker replaces Superintendent David Pryce, the current Chief of Staff who is joining the Australian Federal Police and will be promoted to the rank of Commander. Other notable moves include Superintendent Tony Fuller the current head of Disaster Victim Identification (DVI) who is moving to run Palmerston Station and Superintendent Kris Evans will take over the Major Crime Unit.

While the shake-up by McRoberts in the Senior ranks is significant, a review being undertaken by Assistant Commissioner Mark Payne and Commander Rob Kendrick has the potential to cause a mutiny within the serving ranks.

Payne and Kendrick are undertaking a review that will restructure the way Police in the Darwin Region operate. Ideas include: amalgamating the newly reformed traffic branch within another Unit, combing the Commanders Tactical Team, Youth Crime and Domestic Violence Unit into one Unit overseen by a Senior Sergeant who reports to a Superintendent and joining the Casuarina, Palmerston and Darwin Detectives into one Unit based in the City.

Creating one Detective Unit could undermine the street knowledge and experience of Investigators who would be required to chase bad guys in suburbs they’re not familiar with, thus undermining their effectiveness.

One Detective said the proposed changes ‘would share the work load at night, but it’s been tried before and it didn’t work.’

Assistant Commissioner Mark Payne has reportedly been on a listening tour around the three main stations – Casuarina, Darwin and Palmerston. Payne allegedly told one meeting – ‘.. we (the Commissioner) want to implement these changes in a month’. The response from a 15 year veteran was ‘hold on .. we’ll need six months at least’.

Commissioner John McRoberts has hit the ground running. So far it’s been a Carl Lewis performance over the first 100 metres, but only time and the clock will tell if he finishes the marathon without suffering a few blisters along the way.

This entry was posted on Friday, May 14th, 2010 at 5:16 PM and is filed under Uncategorized. You can follow any responses to this entry through the RSS 2.0 feed. You can leave a response, or trackback from your own site.