wondering what I had committed myself to the night before.

I’d been drinking at ‘Crazy Kim Bar’ in Nha Trang, a coastal holiday town in Vietnam. Now, 7 hours later I was the official beginner’s English teacher. Walking into the classroom the 30 plus students – aged between five and 50 years old were just as surprised to see me, as I was nervous and unsure what to do.

The regular Vietnamese teacher then handed me a thick book and said .. ‘just work from the text, write the exercises on the blackboard – don’t worry, they can’t understand you. It’s a beginner’s class .. they don’t understand English’. So, I was on safe ground!

The free English language school was established by a tough, confident woman with a flirtatious smile named Kimmy Le. Aka: ‘Crazy Kim’. Ever the businesswoman, attempting to teach the class how to read an English menu .. she yelled: ‘Make sure you teach them about the Government and restaurant taxes!’

Her story is one of survival, passion and smarts.

As a teenager she and her older brother fled Communist Vietnam onboard a wooden boat packed with fellow escapees. After three months at sea – the Le’s found dry land, refugee status and safety in Holland. A University education led to meeting a boy, a short marriage in Canada and a new passport.

It was past mid-night .. we sat chatting at the Bar when Kim said: ‘… I did it because of that pedophile thing!!!’. It didn’t need explaining.

Now in possession of a Canadian passport and no longer married Kim returned to Vietnam and started teaching Information Technology at the Nha Trang University. What caught her attention were the children living on the beach – selling what they could, sometimes themselves in order to get enough money to buy food.

According to Kim – her lunch times were spent at the beach, warning boys and girls about the men who gave them money for sex. It was one woman’s personal war on pedophiles.

She soon quit teaching – and brought a rundown bar around the corner from a ‘woman holding a baby who was desperate to sell’, according to Crazy Kim – ‘She wanted four million dong .. I talked her down to 2 and a half million dong’  .. so began her career as bar owner and anti-pedophile campaigner. 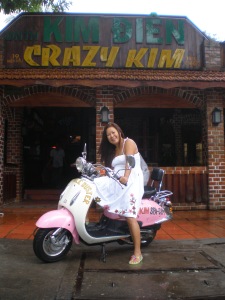 English classes were taught to the street kids inside the bar.

‘I slept on the pool table for a month and had a shower installed in the toilet’ .. Kim remembers: ‘.. I started playing music and the place became packed’.

Outgrowing her beginnings – the now Crazy Kim Bar has a dance floor, three bars, a garden area and two classrooms.

“Hands off the kids” is her motto – as she rides around Nha Trang on her pink motorbike nicknamed the ‘PEDOPHILE BUSTER’.

But, I’m quickly reminded it’s still Vietnam and the old ways still exist. A police officer came in demanding to see the staff list. One new staff member wasn’t on the list – a fine, it was then decided the music was too loud and the lights too low. The police officer demanded $100 US – a sort of on the spot fine to clear up the breaches.

By now the dozen female Dutch students in Vietnam to experience the culture decided with the European dance hits no longer playing, it was time to go and so followed the five Aussies blokes who had been gazing the girls. With the western dollars gone home, Crazy Kim stood her ground and refused to pay. The police officer left empty handed, we stayed and drank, no music and with the lights a little brighter.

The lights shone on a trophy wall of sorts at the entrance to the Crazy Kim Bar. Photographs and headshots of the children Kim had saved, the people who had helped and a brief outline of Crazy Kim’s story.

‘People want me to write a book and make a movie about my life’ she said. I asked what she would do with the money and without hesitation Crazy Kim answered: ‘.. I’d build a new English school for the kids’.

If Crazy Kim is willing to accept a hung-over mongrel three-legged dog with no tail like myself .. she’ll have no shortage of English teachers.

This entry was posted on Monday, November 2nd, 2009 at 12:08 PM and is filed under Uncategorized. You can follow any responses to this entry through the RSS 2.0 feed. You can leave a response, or trackback from your own site.